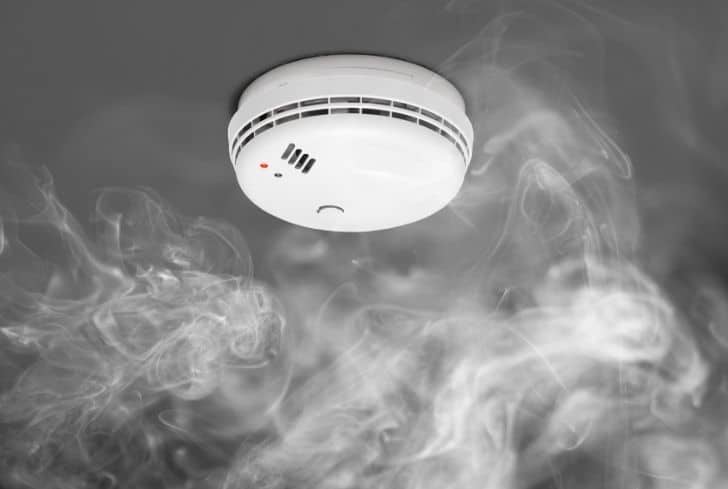 Most homes are equipped with smoke alarms, and other people often wonder if candles can set the alarm off. You may not have a smoke sensor in every room, but it may be very inconvenient to have a false alarm.

The last thing you want is for the fire department to appear in your house just because you’ve got a candle burning. The truth is that a candle can set off a smoke alarm, but it is not that very common.

The candle, even when blowing it out and it appears like a lot of smoke, just doesn’t put out that much smoke or combustion particulate to activate the smoke alarm. Compare this to when you are burning something in the kitchen, a huge amount of smoke is generated, just over a longer period, so it doesn’t seem to be as bad compare to just puffing out a candle.

It’s more about the generated smoke/particulate per unit volume, rather than time, which you get loads more from when burning food vs. the small amount of wax burning in a candle.

How Do Smoke Detectors Work?

The oldest smoke sensors are heat detectors, and for that, they are occasionally used in places where fast-burning fires might occur, and they are very rare in residential homes.

You are most likely to have a smoke detector in your home, which will detect heat, smoke, and fire much faster than another device. There are three different kinds of smoke detectors, including ionization, photoelectric, and a combination of these two.

When smoke or fumes enters the device, it activates the alarm. This can include smoke from anything, but it has to be at a specific amount of smoke to set it off.

Do Candles Set Off the Smoke Alarm?

Probably not. As most candles do NOT normally create sufficient smoke to set off most smoke sensors. Some people use candles and incense in their homes on a daily basis, without any issue. … And obviously, lighting dozens of candles directly below a smoke alarm sensor is likely to result in an issue.

Generally speaking, candles don’t produce sufficient smoke or fumes to set off a smoke sensor. The candle gives off a lesser amount of smoke consistently, and it only varies if you blow the candle.

That being said, the candle smoke is often blown by a ceiling fan. However, the only time that your candle will produce or put out more smoke is when you try to blow it out.

See also  Why is My Hot Tap Water Cloudy? (And Ways to Fix)

You need to be careful once you blow your candles out and ensure that they are not located close to the smoke alarm. If you blow them out and the smoke goes up directly to the smoke sensor, there’s a chance it could be triggered.

How to Prevent Candles From Setting Off Your Smoke Alarm?

If you admire lighting candles, you may need to take some of these steps to make sure that they don’t set your smoke sensor off.

How to Put Out a Candle Without Producing Smoke?

You can put out a candle without producing any smoke by doing the following steps. The method is to use a candle wick dipper, which could be a device used to bend your wick.

You take the dipper and push the wick into the wax. The result is that it puts out the fire, and the wax prevents it from releasing any smoke.

Smoke is emitted by the wick when the flame is extinguished, which is why you need to make sure that the wick is unable to produce the smoke. You can accomplish this goal by bending it into the candle melted wax.

How to Blow Out a Candle?

How Do You Snuff a Candle?

Take a skewer or chopstick and use it to bend the burning wick over into the melted wax pool which will extinguish the flame. Then reposition the wick for the next lighting. It produces zero amount of smoke and soot when extinguishing. Wet your fingers and pinch the wick.

What Kind of Smoke Does Smoke Detectors Detect?

The smoke detectors or sensors can detect any kind of smoke as long as it reaches it sensors be it smoke from cooking or even shower steam can sometimes set off a smoke alarm.

If the air in the chamber includes particles like smoke or dust, the light is distributed and some of it comes in contact with the sensor, causing the smoke alarm to go off. Following the National Fire Protection Association (NFPA), “photoelectric smoke sensors are usually more vigilant to fires that start with a long period of smoldering”.

How do you choose the perfect smoke detectors for your home or office?

OK. We know we need smoke detectors. But does one have any idea how they work?

If your answer is no, then don’t to worry. You’re in the majority. Most people aren’t familiar with how, exactly, a smoke detector does work. But just in case you are interested and want to know how these life-saving gadgets work, we’re here to tell you how.

Aside from heat sensors, you’ve three options when it comes to smoke sensors: ionization, photoelectric, or a combination of the two. Let’s take a look at how they work:

These smoke sensors are far more responsive to fast raging fires and flames. They include a small proportion of radioactive material that passes between the two electrically charged plates, which generate an ionization chamber.

This configuration ionizes the air and generates a current that flows between the plates. If smoke enters that space, it absorbs alpha particles and disturbs the ionization process, which lessens the current and triggers the alarm.

These kinds of sensors typically respond better to smoldering fires—essentially those who begin with a long period of smoldering. Photoelectric alarms work using a photoelectric detector and a light source.

As the smoke enters the chamber and crosses the path of the light beam, light is scattered by the smoke particles, aiming it toward the sensor, which in turn triggers the alarm.

We advised for best protection to homeowners, to use both types of smoke alarm technologies

Combination smoke sensors utilize both technologies which are ionization and photoelectric. With the capabilities of both in one device, you strengthen your chances of being alerted to fire and protecting your family and property when this type of emergency arises. The National Fire Protection Agency (NFPA) recommends homeowners to use both technologies to get the most protection for their home or office.

Residential fires that result in casualties, no matter what time of day, including both smouldering and flaming fires. And since it’s quite impossible to predict not only the occurrence of fire but also the type of fire that may hit, having both kinds of smoke-detection technology at home is the way to go.

You’ll get the earliest warning signs possible, regardless of what kind of fire, what time of the day, and whether you’re asleep or awake. And if you install sensors that come with monitoring assistance, your home is protected even when you’re not at home —whether it’s quick, sudden flames or a fire that smoulders for some time.

What Can Set Off a Smoke Detector?

Though fake alarms quite happen often, and that doesn’t mean you must ignore the sound if you don’t see or smell smoke. Some modern smoke sensors have high sensing capabilities and can sense hidden fires, like electrical ones before you can.

If an alarm sounds assume there’s a fire and ensure you follow the proper safety precautions. To help you better understand how smoke alarms do work, here are the main causes of what can set off a smoke detector or also false alarms.

5 Reasons For Smoke Detector Setting Off

If you don’t keep an eye on the stove when cooking, your dinner may produce smoke, which may trigger the smoke alarm. In some cases, smoke isn’t even essential — a hint of burnt food can be enough to set off the smoke sensor. Also, make sure that your smoke sensor is optimally placed, like in the hallway leading to the kitchen, not in the kitchen itself so it won’t always be giving you a false alarm.

Leaving bread in the toaster or popcorn in the microwave for a long time can happen to many of us here. That send out heavy particles of smoke into the air, which your smoke sensor picks up. To avoid this kind of situation in the future, keep your smoke sensors at a far distance from these devices.

Fireplaces also can cause smoke sensors to set off or give false alarms. Your fireplace can sometimes send smoke into your house, which sets off or trigger the alarm.

This might have you thinking your smoke detector is faulty or something but is not, though. Your chimney may be dirty, and the dampers may not be properly set. therefore you might want to hire a chimney sweep if your fireplace sends smoke into your home.

Dense water vapour is like humidity when it comes to triggering the smoke sensors or false alarms. When you are taking a shower or boil water on the stove, smoke sensors can sense the steam and trigger the alarm. Make sure your bathroom and kitchen are properly ventilated to prevent this.

Small bugs love dark spaces in your home, so some may crawl into your smoke sensors, setting off a false alarm. If you don’t know what caused an alarm, open the gadget and check for little insects. Or use pest control spray it around your smoke detector if insects were the culprit.

Candles do sometimes produce a little bit of smoke, which leads people to wonder if they can set off their smoke sensors. The answer is that they rarely do.

You should try and make sure that your candle isn’t located close to your smoke sensor, and be careful whenever you want to blow it out. As long as you exercise caution, you shouldn’t have any problem or difficulty with the smoke sensor.