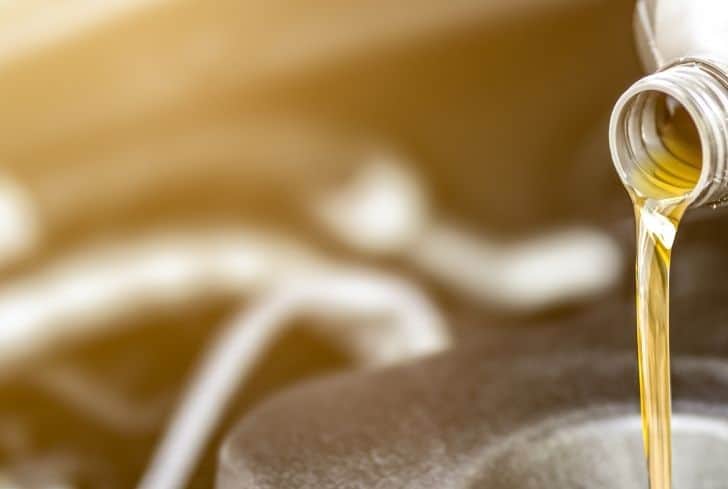 Toilets are a modern-day convenience, but they’re not so great at disposing of non-human waste, such as paper towels and grease. In contrast to just throwing away these items, flushing them down the toilet can block drains, taint water supplies, and even harm the environment’s ecosystem.

According to American Water, a public utility, because your pipes are barely four inches in diameter at their widest point, seemingly some objects can create serious plumbing issues. In addition to correcting water damage caused by a blocked toilet, hiring a professional to snake your drain may cost hundreds of dollars.

Is It OK To Flush Food Grease Down The Toilet?

It’s not ok to flush grease down the toilet as it can cause blockage of pipes with time. You should dispose of cooking oil and fat in an environmentally friendly manner. Though, some individuals believe it’s OK to flush them down the toilet.

What Happens If You Flush Grease Down The Toilet?

Flushing oily food down the toilet can lead to a clog in the pipes in the long run. The belief that flushing grease down your toilet is preferable to dumping grease down the kitchen drain is widespread, yet it is a dangerous illusion.

However, grease is a viscous liquid that will ultimately cool and solidify on the inside walls of pipes due to the condensing action. Over time, the pipe hole will get smaller and smaller until it can no longer accommodate anything.

Can You Dump Grease Outside?

No, you are not allowed to dispose of grease in the open air. To properly dispose of your used cooking oil, you should not toss it outdoors. The oil poured on the ground will enter the sewage system and create obstructions.

In addition, the Environmental Protection Agency (EPA) warns that animal or vegetable-based oils and greases might harm animals if left outdoors.

Is It Bad For The Environment To Just Throw Away Grease?

Yes, it is bad to throw away grease from the environment. It’s crucial to properly dispose of grease waste as environmentally friendly as possible since more restaurants and food outlets are open now than a decade ago.

See also  Can You Replace the Shower Head in Your Apartment?

Tossing your old cooking oil outdoors is not an excellent technique to dispose of fat. If you dump oil on the ground, it will ultimately find its way into the sewage system and create blockages. Additionally, according to the EPA, animal or vegetable-based oils and greases may pose concerns for animals when left outdoors.

Blockage and pollution from fat, oil, and grease are increasing, producing serious challenges for drains and sewers and pouring more and more pollutants into streams and rivers. It may be expensive to remove these obstructions, negatively influencing the environment.

What You Can Do To Help:

Once a month, inspect and clean up your grease trap. A blockage in a pipe can occur as the fats, and oils cool down and solidify, trapping other particles and causing clogs. As a result, the line may need to be replaced, which might cost a lot of money. It’s best to leave cleaning your grease trap to the experts.

Cooking oil may be reused. It is mandated by law in certain places. The consumption of fossil fuels and landfills is reduced by recycling your used cooking oil suitable for the environment. Keep the garbage out of the drainage system.

Educate your employees on how to dispose of grease waste appropriately. Educate your customers on the dangers of disposing of food waste down the toilet or sink drain. Tell them that if they don’t do this, it will cost the business money and hurt the environment.

Keep a record of your cleaning activities. Cleaning schedules and frequency records may help your business save money by serving as a constant reminder.

What NOT to do:

You should never flush cooking fat, oil, and grease down the toilet or sink. Before placing pans and utensils in the dishwasher, try to wipe or scrape them clean. Please put this in the trash as soon as done with it. It’s best to store any used cooking oil in a closed container away from drains to prevent leaks.

Do not use drain cleaners, chemicals, or bleach in a trap. Killing beneficial microorganisms may have negative consequences for the ecosystem.

Avoid running hot water down the drain when attempting to dissolve fat or grease. Further clogging your sewage system will melt the grease solids and push them farther down the drain or into the wastewater.

How To Dispose of Grease?

1. Storing the Waste Oil Appropriately for Collection and Recycling

The first step in the correct disposal of waste oil is to store it in a suitable container. Using the oil’s original containers for transportation is the safest method. To prevent leaks that might damage the environment, you should seal the storage container firmly.

You should avoid containers with antifreeze, paint, or chemicals if the oil is to be recycled or reused, particularly when selecting a storage container.

It is essential to carefully ensure that the spent oil is transferred into the storage container to minimize leakage. Once the container has been properly sealed and labeled, it is time to put the finishing touches.

See also  Can You Flush Egg Yolks Down The Toilet? (And Egg Shells)

2. Know What You’re Disposing of and How to Do It Correctly

Before disposing of waste oil, you must thoroughly understand the substance you want to discard. So you’ll know how to get rid of it properly. It’s possible to put yourself in grave danger by burning something you don’t understand.

Heaters and boilers may securely dispose of certain oils, but you may require professional disposal services for other oils. Understanding the oil you’re dealing with can help you pick the most effective and safest disposal technique.

Because you won’t be able to dispose of the used oil the same day you remove it from your machine, you should store it in a location where children and dogs cannot get it if you don’t have the proper security measures.

Especially if it is stored in a typical fuel storage facility, used oil should not be kept in the exact location as waste oil to prevent misunderstanding.

To dispose of waste oil safely and efficiently, most companies that offer waste oil services have the requisite equipment and facilities. The degree of knowledge and the cost should be considered while hiring such services. Contact a local waste oil remover if you don’t have the capacity or ability to dispose of the oil.

5. Pour It Down the Sink or Into the Septic Tank

You should never use drains and septic systems to dispose of used cooking oil, grease, or other oil. Sewage and drainage systems get clogged as a result.

To dispose of it properly, either by recycling it or hiring a professional, it should be carefully kept and tagged.

To properly dispose of waste oil, you must first take care of your equipment or vehicle. Clean and well-maintained machines and vehicles are less likely to leak oil, which minimizes the demand for new oil and the amount of old oil disposed of.

7. When Burning the Oil, Ensure You Have the Right Heater

The correct heater is critical if you want to burn your used oil as a disposal method. Recycling old oil by burning it is a safe and cost-effective technique to produce a new product.

However, you must use a heater intended to dispose of waste oil. Specially constructed carbon steel waste oil burners should not be mistaken for standard cast iron boilers.

Certain waste boilers can only burn a limited number of different oils. It is vital to invest in high-quality equipment that is more dependable To burn a wide variety of old oils.

Check whether the waste oil disposal equipment you’re looking at is certified. As long as a heating or boiler unit is approved correctly, it may burn a wide variety of waste oils safely and efficiently.

9. Use the Laid Down Oil Disposal Guidelines

It is essential to follow the manufacturer’s instructions when disposing of spent oil. When in doubt about how to dispose of old oil, one should always consult the owner’s handbook.

See also  Can You Flush Newspaper Down the Toilet? (And What Not To Flush)

There are a variety of boilers available on the market today. While some are designed for ease of removal, it is vital to get acquainted with the equipment before utilizing one of them.

10. Get Rid of Anything That Has Anything to Do With the Spent Oil

Most individuals fail to get rid of other tainted pieces when they get rid of waste oil. It is usual for people to throw away the old oil and forget about the oil filter after changing the motor oil, but that should not be the case. In the same way that spent oil is harmful to the environment, so is the oil filter.

Can Oil Go in The Toilet?

No, you should not flush oil down the toilet or the drain. It has the potential to choke pipes and, in the worst-case scenario, your distribution lines, and drainage field. It may block your pipes, but it can also jam the city’s sewage mains. It is likewise not recommended to apply oil to a septic system.

Is It OK To Flush Condoms?

You should not flush condoms down the toilet, which is unacceptable. Flushing condoms down the bathroom regularly will most certainly result in a buildup of latex in your pipes and septic tank, which may lead to obstructions and the failure of your septic system over time. It is best to dispose of a condom safely by wrapping it in a few pieces of toilet paper and throwing it in your trash can.

How Do You Dissolve Grease in Pipes?

When dealing with a grease clog, salt and baking soda may be used to dissolve it. Pour 12 cups coarse salt and 12 cups baking soda down the drain, followed by around six cups of boiling water to clear the blockage. Allow the mixture to remain for at least eight hours before flushing it out with water from the sink faucet.

How Do You Dispose of Cooking Grease At Home?

If there is any fat left in a pot or pan after cooking, allow it to cool and pour into a metal container to collect the grease. When the can is empty, place it in your kitchen trash can.

You should not flush grease down trash disposals. Instead, insert baskets or strainers into sink drains to collect food scraps and other solids.

What is Safe To Flush Down The Toilet?

You can flush just three types of waste down the toilet: urine, excrement, and toilet paper. There are no other options. In another way, human waste is sometimes known as the three Ps: pee, poo, and paper. Typically, wastewater travels in two directions: to the source or the treatment plant.

What Happens If Something Gets Flushed Down The Toilet?

Whatever you flush is forced into your house’s drain-waste-vent system by the water pressure and gravity in your home (unless the object you tried to flush clogs your toilet).

The drain-waste-vent system in your house has pipes for collecting used water and garbage and pipes that prevent sewer gases from accumulating within your home’s walls.