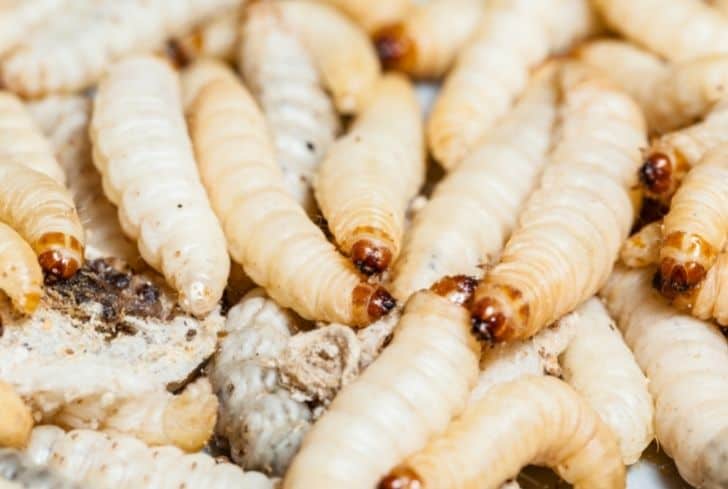 Leave alone setting eyes on them, a mere thought of these wiggly beings is all it takes to get most of us shivering. But as long as there is improperly stored trash, your home remains a favorite ground for maggots.

You already are into the fight. You just noticed that maggots are slowly invading your home. They aren’t at all welcome. The infestation is already grossing you out together with the people around you. You feel like you should flush maggots down your toilet to get rid of them once and for all. But can that idea work? Well, let’s find out!

Can You Flush Maggots Down The Drain?

If you are wondering whether you can flush maggots down the drain, the answer is you can. But before you do that, we recommend that you first kill them. That’s the only surefire way that they won’t come back.

To begin with, maggots invading homes is a common occurrence. When summer – or spring – rolls around and flies are active and flying all over, they are more likely to lay tens of eggs on your surfaces. Maggots come to being after these eggs hatch. So yes, those whitish pests you see on your trash bin basically are fly larva.

The transition from eggs to larvae takes a day to about 48 hours. Then, the larval process will go for about 8 days before they become flies, which again lays eggs that hatch larvae in 48 hours… and the cycle continues.

So basically, when you notice maggots beginning to invade your home, it’s always best to act with speed. Otherwise, their number will multiply in no time and make things harder for you.

We understand that dealing with maggots isn’t a pleasant affair. In fact, afforded the opportunity, most people will choose any other task over fighting these larvae off their homes. But again, it’s a chore you have to face – and with speed on that case!

Now, flushing maggots down the toilet is an attractive idea. But before you jump into executing the thought, it’s worth knowing one thing. You see, unlike mature flies, larvae won’t die when you put them in water. As such, if you have to flush them down your toilet, first ensure that they are dead.

Fortunately, killing maggots isn’t a complex thing. Sometimes you don’t have to spend a cent on chemical products. More of that will be coming later in the article. But for now, let’s take a look at something else.

Do Maggots Survive in Water?

Maggots will survive in water. As such, if you have been thinking of immersing them in water, think again. These creatures don’t have any problem with water. They are born great swimmers and can live inside water for a very long time.

You see, every creature is born with some ingrained knowledge. For instance, a baby doesn’t need anyone to train them on crying. It’s their default reaction when they first encounter the world.

Now, that’s the same with maggots. These beings hatch already knowing some things. And yes, one of these things is swimming. Right from birth, maggots can swim – and that’s why you can’t kill them by dipping them in a container of water.

Before I proceed, let me clear something up. I don’t mean maggots can’t die in water. They can. But again, the water has to meet some conditions. So yes, you can’t use just any water for this purpose.

How Long Does It Take To Drown Maggots?

Maggots won’t drown in water alone, no matter the hours they stay in it. As said, water makes a comfortable habitat for these pesky beings. If you can invent a way to make the water an inhabitable place for them, then it’s possible to get rid of them in a matter of hours.

You see, we already said that maggots hatch knowing how to swim. Also, unlike humans, they don’t have lungs. Instead, they come with spiracles, the very holes they use to breathe when burrowing inside of matter.

Now, these spiracles are more efficient than the human respiratory system. These tiny holes can take in large amounts of air to keep maggots breathing for many hours even after they can’t access oxygen.

But that doesn’t mean you can’t drown maggots. You can, but you’ll need to work with water and some other substance like cinnamon. Here, the ratio of cinnamon to water should be 1:5. That’s to say, for every five parts of water you use, add one part of the element.

Then, you can pour the solution over the infestation to flood it. The combination will make things unbearable for these unwanted pests and eventually kill them. Death may take up to six hours to happen.

Alternatively, you can use vinegar in place of cinnamon. Stick to the same procedure and mixing ratios. The method works well, although it needs a little bit of patience. Here, you may have to wait for as many as 18 hours before you come back to dead maggots.

The other way to get rid of maggots by drowning them is by using alcohol. Get a bottle of beer and leave it open next to the infestation. The pests will crawl into it and drown in the beer.

See also  Can You Spray Paint Artificial Grass? (Yes or No)

But again, the idea of using beer doesn’t provide a surefire way for killing maggots. After all, not all of these pests will find their way into the container. Furthermore, it just isn’t viable for massive infestation. After all, how many people would be willing to sacrifice several cans of beer to maggots when there’s an alternative way?

Yes, bleach is one of the most reliable solutions to your current maggot problem. Bleach will effectively clear your surface of maggots as it does stains. And yes, it doesn’t require any skill to get results.

Begin by mixing equal parts of water and bleach. You can mix the solution in a plastic or metallic bowl. Then, pour the solution over the infestation, careful enough to hit every maggot.

If targeting the outdoor trash bin, close the lid after pouring the solution. That will help suffocate the pests and make them die faster. Leave them for about 30 minutes and come back to dead maggots – and that’s it.

But before you use this method, ensure that you are aware of all the precautions when working with bleach. For instance, avoid mixing bleach with any other chemical as it may birth a dangerous reaction.

Boiling water will definitely kill maggots. While they can survive in an aquatic environment, maggots can’t thrive in a high-heat environment. The intense water temperature will kill every insect it touches.

To begin with, the fact that they are more common during summer days doesn’t mean that maggots love heat. No, they don’t. In fact, using heat is one way to get rid of their infestation – and that’s where the idea of using hot water comes in.

Boiling water is one of the most reliable ways to fight maggot infestation. But ensure that you are careful enough when working with hot water. Pour it gently over the insects to avoid burns from splashes. It should bring instant relief.

But again, one downside of water is that it won’t prevent future infestation. In fact, as the water cools down, it morphs into a favorite breeding zone for the very pests. To avoid that, treat the surface with insect repellent. And yes, mint oil is one of the best options for keeping off maggots from recurring.

If you want to kill maggots instantly, boiling water is the most effective way. While insects may mutate to become resistant to insecticides, there’s no way an insect can mutate to become heatproof. No pest will put up with hot water.

Bleach and hydrogen peroxide will improve the killing power of hot water, giving you results in just seconds. But that’s not all – the two ingredients will also serve as a disinfectant and a repellent for potential future maggot attacks.

How To Get Rid of Maggots in the Toilet?

The toilet is one of the favorite places for maggots around the home. If you just noticed maggot hordes in your home bathroom, the procedure below will help get things back to normal.

Step 1: Get Your Supplies

Once you’ve identified the toilet as the main infestation area, the first thing to do is get the right paraphernalia for the job. The good thing is that you don’t need much here. With vinegar, salt, and baking soda, you are well-equipped for the job.

You still could use other chemicals for the job. But that’s taking things way too far. Instead, stick to the natural solutions first. So yes, mix a cup of vinegar, 1/2 cup of baking soda, and 1/2 cup of salt.

Once you have the blend, pour everything inside the toilet and leave it. You can leave it overnight. That will provide ample time for the products to do their work. Then, flush – and that’s it! This procedure will help fight the infestation from your toilet.

For other places around the home, you can consider;

Once you eliminate the infestation, it’s best to put into place preventative measures. Otherwise, you will keep on fighting a battle that will never be over. To prevent future maggot attacks, here are a few tips;

Maggots are a common infestation and don’t always result from poor hygiene. They are more popular in trash bins, toilets, beneath the carpets, and other areas around the home. Fortunately, they are easy to eliminate. It could be as easy as pouring hot water over the infestation.

Only ensure you respond to the infestation as soon as possible to avoid them from multiplying. Again, always follow preventative measures to keep your home safe from these beings.