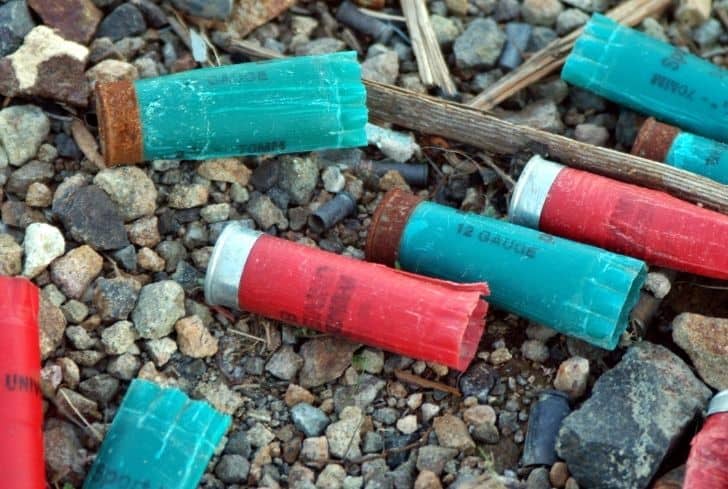 You cannot throw shotgun shells away. Throwing them in the garbage or dropping them on the ground, whether they’re unused or used shells, will have negative consequences. To find out the proper disposal technique in your region, contact your local police enforcement, gun dealer, or gun range for a guide.

What Are Shotgun Shells Made of?

Nowadays, shotgun rounds consist of at least three parts: a plastic casing, a brass-plated steel base, and gunpowder with priming inside. The plastic case is filled with several types of shots.

These are steel balls or projectiles, as well as lead, tungsten, and other materials. Depending on the kind, the shotgun shell may have various quantities of brass as part of the casing.

But why is any of this important? The rationale is straightforward.

Shotgun shells are made up of both reusable and recyclable components. They also include potentially hazardous elements such as priming and gunpowder, which can readily ignite or explode.

Keeping that in mind, those materials already provide two reasons why shotgun rounds should not be thrown away or buried.

Is It Safe To Throw Away Shotgun Shells?

Throwing a shotgun shell away is unsafe as it may cause environmental pollution. So, what if you decide to toss shotgun shells away? Here are a few examples of what may happen as a result:

Let’s say you bury shotgun shells in your backyard or throw them away in the trash. There’s always the possibility that the shells might be discovered by someone or something in either situation.

They won’t be aware that the shotgun shells are tainted if it happens. In the worst-case scenario, the unexploded shell could injure the child or pet playing with it innocently.

See also  Can You Put Lemons in the Garbage Disposal?

Assume you toss the shells away in the garbage. That waste will be placed in a bag and sent to a landfill or recycling center by a garbage truck. There are a variety of reasons why the shell can go off along the route.

It’s possible that the temperature will rise too high or that the compactor will exert too much pressure on the shells. If those shells go off, someone could be injured, and anything flammable close could potentially catch fire.

3. You Could Damage Machinery or Hurt People

Shotgun shells can end up in a recycling center or a trash sorting machine, depending on how you dispose of them. Worse, they could end up in a landfill or an incinerator.

As you may have realized from the pattern above, such shells have the potential to explode, causing damage to machinery or harming the individuals sorting the rubbish.

4. You Hurt The Environment

You’re squandering a lot of usable material by throwing away those shotgun shells, no matter what condition they’re in. Instead of throwing them away, send them to be recycled. Some people may repurpose the shells for new ammunition or separate the materials and recycle them individually.

Can Shotgun Cartridges Be Recycled?

He subsequently devised the machinery necessary to make this possible, allowing gun clubs and game shooters to dispose of their cartridges responsibly. They could recycle 100% of the used shotgun cartridges that would otherwise be disposed of in a landfill or burned on site.

Old ammunition has the potential to explode; therefore, it should always be handled with caution if it exhibits symptoms of deterioration. The casing of older ammo might become volatile if it has degraded. With these considerations in mind, it is worthwhile to go deeper into this critical subject.

Old ammo is generally safe, although it is more likely to cause problems than new ammo. If you’ve lately come into possession of outdated ammunition, you’ve probably wondered if it can explode.

Depending on the state of your purported defective ammunition, some of the components may be recoverable. If you have any shooting pals who like to hand load their ammo, they’d appreciate some free supplies in the shape of your range rejections.

It is pretty simple to remove the bullet from the case of the problematic cartridge using a low-cost kinetic bullet extractor tool. The primer or powder may be worthless, but the bullet and casing can indeed be reused. Even the worst-case scenario ammunition can be recovered by someone with the ability to melt and cast his lead bullets.

One of the most frequent remedies to the poor ammunition disposal problem appears to be burying the ammo in your lawn. Honestly, burying it is unlikely to damage anything if we’re just digging dip in the ground.

However, much like dumping it in the garbage, it can be banned in your region, and there is a slight possibility that it may have a detrimental environmental impact.

Lead occurs naturally on the earth but not in the same concentration or purity as that found in your ammunition. And what if the next man who moves in decides to plant tomatoes on top of your ammo dump? If such tomatoes are ingested, they might be harmful to your health.

Another popular idea is to turn your poor ammunition inactive and then throw it away. Aside from the fact that you’d still be tossing away lead with your regular rubbish, this form of ammunition disposal, if effective as it eliminates the explosive threat.

Additionally, you can immerse your ammunition in water or motor oil, destroying the powder and primer for a few days. There’s also the more involved method of pulling the bullet, dumping the powder, and then spraying the interior of the casing with WD-40 to destroy the primer.

These appear to be excellent ideas at first glance, but modern ammo is remarkably tough. Moisture, oil, or solvents can temporarily disable a cartridge, but they can frequently be resurrected simply by allowing them to air out. You wouldn’t depend on a quick dip in motor oil to render a box of ammunition indestructible.

So, let’s assume you’re either not up to the chore of getting rid of this stuff on your own, or you have a considerably greater batch of defective ammunition than the usual range-goer.

It’s time to bring in a professional to dispose of your ammunition securely. You may take a few approaches, and the alternatives accessible to you will vary depending on where you reside, but these disposal services are nearly always free.

Your friendly neighborhood cops are the most probable source for someone who can take care of your ammunition. Call your local police or sheriff’s office and see if they can take it off your hands.

See also  Can You Use Roof Paint on Wood?

If your local police department has an explosives disposal squad, they could even use your ammunition in a training exercise. After all, your ammunition may go boom! Bring some baked cookies, and I’m sure they’ll let you see the fireworks.

A hazardous waste drop-off location is available at many local landfills or trash management programs. This is where you can dispose of outdated batteries, used motor oil, and other home chemicals that are not suitable for disposal in regular garbage.

They will sometimes take ammunition, but this is not always the case. They should, however, be able to give you an option, which may be another local body, such as the fire marshal. When I phoned our local trash management facility, they advised me to take the ammunition to the police station instead.

If you don’t have a significant amount of worthless ammo, you might visit your local indoor shooting range. They should already have a safe system in place for disposing of defective ammunition, and they may be willing to take a few rounds off your hands (especially if you buy something first).

However, you decide to get rid of the ammo you can’t use, take caution and, if in doubt, check your local and state regulations.

Yes, shotgun shell wads decompose. Interestingly, before the introduction of plastic wads, all wads were biodegradable. Cardboard, cork, or fiber are all options. A tiny number of shotgun users still use such biodegradable wads on purpose and in locations where plastic wads are prohibited.

2. How Far Do Shotgun Wads Go?

With each shot, a wad is dropped, and there is no practical method to collect expended wads, which generally travel 30-50 yards. Non-biodegradable plastic shotgun wads can negatively influence safety, nuisance, and freshwater and estuary waterways ecosystems.

There has been a renaissance of sorts in paper shotgun shells, to the point that several big manufacturers, including Federal, Rio, and Fiocchi, have resumed production after decades of abandoning the market to niche companies like RST and Sellier & Bellot.

4. Can You Cut Open A Live Shotgun Shell?

Yes, you can cut open a live shotgun shell. A shotgun round typically consists of a casing, primer, gunpowder, and a projectile enclosed by a wad composed of plastic or thick fabric. Opening shotgun shells has been done; however, cutting into a casing with gunpowder inside is highly risky and can result in severe damage or death. 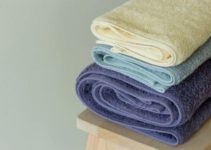 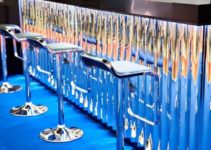