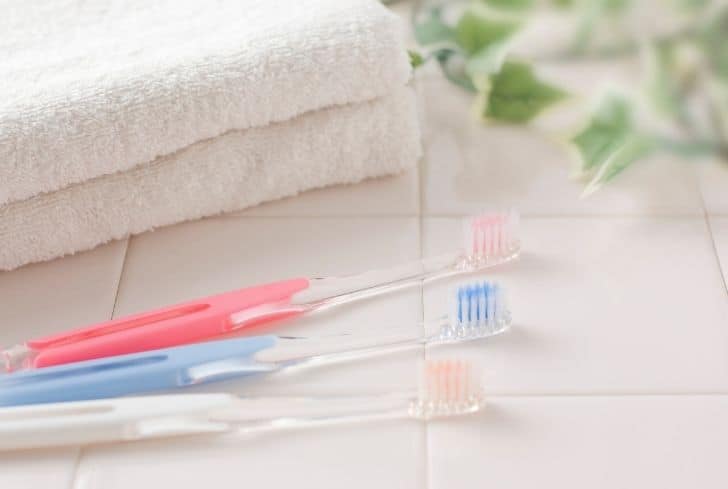 You just brushed your teeth and are returning your toothbrush into its holder. Oops! You missed the slot! Your toothbrush falls to the floor. Even worse, it lies on its face down. “It must be a bad day,” you think. Well, not really! Such moments happen to the best of us.

For an old toothbrush, tossing it in the trash bin would be okay with most of us. But for a new brush, or maybe one of the hardest to replace, one thing you will want to know is if there’s a way of once again making it safe for use.

Well, don’t think about the five-second rule here. It may work for other things. But for toothbrushes, it just doesn’t. Your brush needs only a fraction of a second on the floor to attract millions of bacteria. With that said, what next?

Should You Throw Away a Toothbrush That Fell on The Floor?

Whether or not to throw away your toothbrush that fell on the floor depends on several factors. Consider the condition of the floor and that of the toothbrush itself as well.

For old toothbrushes, they should go directly into the trash no matter the condition of the floor. It doesn’t make sense to spend much time and effort cleaning a toothbrush that could have ended up in the bin a few days later.

The above table helps you know the appropriate action to take after your toothbrush drops onto the floor. But generally, if no matter the surrounding factors are comfortable with replacing your toothbrush after it falls, that’s the safest route to follow.

If you can’t discard it for whatever reason, it’s also allowed. Only ensure that you don’t use or put the brush in the holder before cleaning it. As innocent-looking as it may look, a toothbrush just coming from the floor can host dangerous microorganisms.

See also  10 Amazing Ways To Get Paint Off Laminate Floor

So yes, find time and clean your toothbrush. Here are several ways how you can go about it;

1. Submerge It In Boiling Water

It looks like a more obvious way of sterilizing a toothbrush. But as simple as it reads, not many people do it correctly. Most people use HOT water and not BOILING water. Wait, does it make a difference? Well, it looks like it doesn’t. But trust me – when it comes to killing bacteria and other microbes, it does!

2. Dip The Toothbrush in Vinegar

Vinegar isn’t only useful for cooking. You can use it as a disinfectant, deodorizer, cleaner, bug repellent, to mention but a few! And yes, the next time you drop your toothbrush on the floor, you could as well bring in vinegar. It’s one of the most effective ways of disinfecting toothbrushes.

Getting results is simple – drop the affected toothbrush in vinegar and leave it for about two hours. After this period is over, remove the brush, rinse it well, and place it back in a clean holder.

No, we aren’t taking you back to a Chemistry lab. Hydrogen peroxide solution is something you can make right in the comfort of your home. Only walk into the nearby Pharmacy shop and ask for hydrogen peroxide. Pour a teaspoon of it into a glass containing water, stir, put the brush inside, and leave it for at least 15 minutes.

3% Hydrogen peroxide will clean your brush of any microbes. In fact, you can adopt it as a sanitary way of storing your brush after every use. But if you have to, always remember to change the solution when placing your toothbrush back inside.

Mouthwash goes beyond what the name says. Other than destroying microorganisms in your mouth, mouthwash will kill germs in your toothbrush. In fact, it’s just as effective for the job as 3% hydrogen peroxide is.

The antiseptic dental product contains menthol, eucalyptol, and alcohol, all good at killing germs. To use, rinse the brush after picking it from the floor to remove any debris, put it in a small cup, add antiseptic mouthwash to cover the bristles, leave it soaked for about 15 minutes and rinse thoroughly with clean water – and that’s it!

See also  Can You Use Bleach in the Swimming Pool? (And Is It Okay to Swim?)

The antibacterial property of baking soda (sodium bicarbonate) also makes it a perfect candidate for sanitizing your toothbrush. It won’t kill bacteria like Salmonella, Staph, and E.Coli, but it will destroy hundreds of other bacteria likely to attach themselves to your toothbrush.

You don’t need much of it to clean your toothbrush. In fact, you only need two teaspoons. Add them to a cup of water and stir to mix before soaking the toothbrush in the solution. Then, allow time for the baking soda solution to work the magic.

Rubbing alcohol, technically called isopropyl, maybe a less popular household product than vinegar and baking soda. But one fact; keeping a bottle of this product within your reach will turn out helpful occasionally.

And yes, the moment your toothbrush touches the floor, that’s one of the moments to turn to your bottle of isopropyl. This household chemical is super tough on germs likely to cling to your toothbrush.

Soaking the brush in this solution for 30 seconds is all it takes to tackle dangerous microorganisms in your toothbrush. A warning, though, the smell and taste of rubbing alcohol aren’t pleasant. As such, always give your toothbrush a decent rinse with clean water after sanitizing it with alcohol.

Perhaps you’ve heard that UV light is highly effective at detecting and killing bugs. But have you ever known that you can use UV light for occasionally sanitizing your toothbrush from bacteria and other microorganisms?

Well, a UV light sanitizer kills the DNA molecular bonds of microorganisms. That causes genetic manipulation. And as I said in my previous article, if a living organism -including bacteria and viruses – can’t correctly read its DNA, then it can’t keep living.

So yes, if you already have one, then you are armed to the teeth to face any germs in your toothbrush. But just so you know, UV isn’t as effective for killing bacteria like hydrogen peroxide, vinegar, alcohol, and other products discussed earlier. It may also degrade the quality of the plastic bristles. But if you are only using it from time to time, that’s fine.

Finally, you can clean your toothbrush using denture tablets. Dropped in a cup of water and then submerging a toothbrush head in the solution, a denture cleaner tablet will use its antibacterial properties to fight bacteria and other disease-causing microorganisms in the brush head.

In fact, if you are hesitant about using hydrogen peroxide or other solutions, this dental product should work well for your needs. Since it’s for oral use, you don’t have to worry just in case any traces remain on the toothbrush after rinsing.

Can You Wash a Toothbrush With Soap?

No, you can’t wash a toothbrush with soap. While soap works well for cleaning a lot of stuff around the house, you shouldn’t use it for washing toothbrushes. Using soap for your toothbrush will always leave a residue that will last for several brushing sessions.

Soap certainly is the go-to detergent for many when it’s cleaning time. We use it for almost all cleaning applications in the bathroom. But when it comes to cleaning your teeth or toothbrush, soap doesn’t make a clever choice.

Of course, soap will kill some germs in the toothbrush. But again, no one likes the lingering taste of soap. Unfortunately, that’s something you have to deal with every time you clean your toothbrush with soap – no matter how hard you rinse it. Even worse, the unpleasant taste can last for several brushing sessions.

In addition, most soaps aren’t antibacterial. And as you probably know, toothbrushes make a favorite ground for lots of bacteria and viruses. That again disqualifies it from the list of things you can use for cleaning your toothbrush once it falls on the floor.

Can You Use a Toothbrush That Fell in The Sink?

No, don’t use a toothbrush that fell in the sink. The sink is one of the areas around the home richest in bacteria. As such, in case your toothbrush falls inside the sink, it’s best to play safe by tossing it.

You see, the bathroom is the room we come out from the cleanest. But ironically, it’s one of the dirtiest places around the home. As harmless and sparkling clean as your bathroom looks, it harbors the most dangerous viruses and bacteria you can find in any home.

As such, when brushing your teeth and you accidentally drop your toothbrush inside the sink, don’t even think of cleaning it – no matter how clean your sink looks. Instead, toss it and get a new toothbrush. That’s what most dentists recommend.

Oral hygiene begins with the condition of your toothbrush. That’s why when your toothbrush contacts the wrong surface, the general rule of thumb is that you should dispose of it.

However, if you can’t follow that route for whatsoever reason, you can still sanitize your toothbrush and make it safe again for use. Luckily, we have several ways of doing that and can always choose the most convenient one for you.