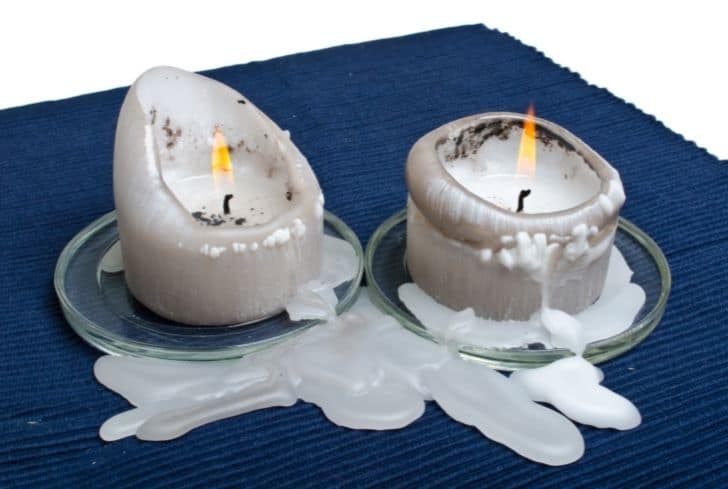 Whether you are looking for an inexpensive way to saturate your space with a luxurious aroma, intend to add the Christmas spirit into your home, or want a way to soothe your mind after a long busy day, candles do the magic. They are the unsung heroes of our time.

Even so, before you grab a pack of candles for your home, know the dangers of having one burning in your space. As much as there’s a lot to love about candles, they can easily attract catastrophe if you don’t follow the basic safety precautions when using one.

Of course, we all know that placing a candle next to flammable objects is dangerous. We also know several other safety rules when using candles. However, one thing you perhaps don’t know is whether candle wax in itself is a threat. So, is candle wax flammable per se? Well, read on to discover this and more.

Can Candle Wax Catch on Fire?

Yes, candle wax can catch on fire and is just as dangerous as any other flammable object within your home. As such, every time you light a candle, treat the wax with a lot of precaution.

While you may not compare the “flammability” of candle wax to that of petroleum, kerosene, diesel, butane, or even alcohol, the fact remains that candle wax will readily catch on fire when you set it on fire – and the outcome can be catastrophic!

Actually, if you’ve ever wondered what keeps the candle burning until you blow it out or the wick gets too short, then it’s all about the wax. Candle wax does the same work kerosene does in kerosene lamps – and is combustible as well!

When you light up a candle wick, it will catch fire for the same reason a clothe would burn when you set it ablaze. The flame will then move closer to the base of the cotton wick, melt the wax around this area, and use it as fuel.

So yes, candle wax can catch on fire, but not readily like other fuels. For it to ignite, the wick has to oxidize it through combustion. That’s why it burns slowly, keeping the candle going for hours after you light it.

See also  Do Candles Burn Out On Their Own?

At What Temperature Does It Ignite?

The temperature at which candle wax ignites depends on what’s actually in it. If the wax consists of pure paraffin, it will ignite at about 392F (200C). However, if there are some additives in the wax, then that will raise the ignition temperature to about 480⁰F (249C).

In the simplest terms, the flashpoint of something is the lowest temperature at which it produces enough vapor for ignition to happen.

Usually, the lower the flashpoint, the higher the flammability of a substance. Something like petroleum has a flashpoint of about −43°C (−45°F), explaining why it’s highly flammable.

But being honest with ourselves, we use the word “flammable” to mean that an object catches fire more easily than we think should be the case. Hence, when speaking from that perspective, it’s safe to say that candle wax is flammable. But technically, it is combustible.

Where Does The Wax Go When You Burn a Candle?

When you burn a candle, the heat from the wick melts the solid wax to liquid and then vaporizes it to produce carbon dioxide, water vapor, and energy in the form of heat and light. This process continues until you put off the flame.

As earlier pointed out, wax serves as fuel to the candle after it melts. Just strike a match, light the candle wick, sit back and watch the reaction. You’ll notice that in response to the heat, molten wax will begin to puddle around the flaming wick.

The heating continues until the bonds holding the molecules of liquid wax break, converting the wax to vapor and carbon dioxide – and heat and light, of course! That’s what happens with any other hydrocarbon.

If you notice some liquid wax dripping down the candle stem, that’s a sign that the candle is melting more wax than what it is actually sending into the air. So yes, the next time you burn a candle and notice that the remaining wax is smaller than it was at first, know that the amount you can’t see went into the air.

See also  Can You Flush Wax Down The Toilet?

Is It a Fire Hazard?

Yes, a candle can be a fire hazard. The fact that the candle burns with a naked flame means it can wreak havoc in your home. But as long as you follow the safety precautions when using and storing candles, fire accidents are unlikely.

Anything alight can cause fire accidents, including seemingly minor things such as a burning cigarette butt.

Speaking of candles, it’s not the wax that makes a candle a fire hazard. It’s the flaming state that gives it the potency to burn. And yes, the NFPA records that candles caused 2% of fire accidents at home and 3% of home fire deaths between 2015 and 2019.

But generally, unless lit, candles can never be a fire catastrophe. The wax may soften with prolonged exposure to sunlight or warm weather, but it won’t melt and catch fire from that.

How Do You Put Out a Wax Fire?

Fire experts recommend a dry chemical extinguisher or baking soda for putting out a wax fire. Don’t use water since it can make the wax splash and spread the fire to the things around.

When wax fire breaks out, it can be just as dangerous as any other fire. That’s why as a candle user, you need to be aware of the safety precautions and how to respond in case of fire.

Pouring water on wax fire looks like an attractive idea. However, it’s dangerous. Wax fire is much like a grease fire. As such, extinguish it by suffocating it and not pouring water on it.

According to fire experts, use baking soda or a dry chemical extinguisher. Either works ideally for the job. Where you accidentally catch fire, remember to apply the “Stop, Drop, and Roll” technique. It will help put out the fire and prevent it from spreading.

Is It OK To Leave a Candle on Overnight?

No, don’t leave your candle on overnight. Any unattended candle can be a fire hazard. As such, always blow out the flame of your candle before you call it a day for you to be on the safe side.

If you are a candle lover, one of the temptations you face is leaving the candle burning the whole night. However, no matter how much you need to carry on that warm ambiance through the night, leaving your candle burning as you slumber could lead to something dangerous.

When asleep, several things may happen;

With all these possibilities, it’s always wise to never leave your candle burning when going to bed. Blow it out or use a candle snuffer to extinguish the flame. Wait a few seconds to ensure that the wick isn’t glowing when you leave to go and sleep.

Where you have to move the candle, be patient after you put it off for it to cool. A glowing or flaming wick can easily cause fires, especially when it comes into contact with flammable materials around the house.

Can a Candle Explode?

Yes, a candle can cause an explosion. However, that doesn’t mean you should toss all your favorite candles into your trash bin. The best thing to do as a candle lover is beware of the potential dangers and adopt appropriate mechanisms to keep everything running peacefully.

Before I proceed, let me point out that it’s abnormal for a candle to explode. As much as there’s a lot of combustion taking place, a candle by itself doesn’t have anything to make it explode.

An explosion will more likely occur when the wax contains some impurities that are explosive. The only other way an explosion can occur is when you melt the paraffin wax and spray it over the flame in a fine mist of droplets.

So yes, a candle will seldom explode by itself.  If it does, there must be something wrong with the wax.

The candle fire can cause a type of explosion, however. But that will happen with the fulfillment of some conditions when burning a candle in a jar or vase.

For example, when water comes into contact with the molten wax, it may cause the candle to splatter to the candle jar, causing it to explode or break.

Although candle wax isn’t technically flammable, it is combustible. Actually, it’s a form of hydrocarbon and acts as the candle’s fuel. When burnt, it produces water vapor, carbon dioxide, and energy.

However, that doesn’t mean candles aren’t dangerous. They are, and you should always follow safety precautions when using them. When used properly, candles are a great way to create a wonderful aroma and warm ambiance.